Sisters Madison and Kinley don’t give up easily.

They study hard in school, and they’re also serious about dance. They might not always feel like going to dance practice, but they do it anyway because they are persistent. That means they keep trying without giving up when they really want something.

But becoming excellent at dance isn’t the only thing these sisters want. They also want to help people. When Madison was in fourth grade, her teacher brought three special packets to class. Each included a photo and details about a child in Compassion’s program who needed a sponsor.

“There were two boys and a girl,” Madison says. “I took the girl’s packet home, and I persistently asked my mom.”

Madison’s persistence helped convince her parents that she was serious about sponsoring the child, a girl named Asti in Indonesia. “My mom said, ‘OK, all right, but if you’re going to sponsor a girl, you’re going to have to find a way (to pay for the cost of the sponsorship),” Madison says. “So she taught me how to make earrings.”

Madison persisted until she was really good at making earrings. At the same time, younger sis Kinley was making jewelry of her own — molding melted crayons into colorful rings. To raise money to sponsor Asti, the sisters started selling their jewelry, calling their business Chic Creek Boutique. They set up shop at their church in Alaska, which holds a big fair that draws people from all over town. Chic Creek Boutique sold enough jewelry to pay for a full year of Asti’s sponsorship! 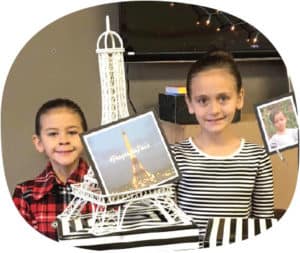 Meanwhile Kinley dreamed of sponsoring a child of her own. A few years later when she was in fourth grade, her family went to see the band For King and Country in concert. On every chair was a packet telling about a child who needed a sponsor. Kinley’s grandma picked up a packet about a 4-year-old girl named Katya in Ecuador. She seemed like the perfect child for Kinley to sponsor!

“I wanted a child who was a little younger than me, so I could give money to [help support] her and feel happy inside,” Kinley says. “So my family started talking and decided that it was OK for me to start sponsoring.”

It’s been two years since Kinley became a sponsor, and five years since Madison became a sponsor. Kinley, now 11, and Madison, 14, persist in selling their handmade jewelry to sponsor Asti and Katya. They love to write to their faraway friends and receive letters back from them. They’re so glad that sponsorship helps give their friends better lives.

“It makes me happy because I know that I am affecting somebody and changing their life even though they’re very, very far away from me." — Madison