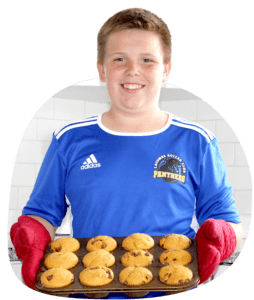 Meet 12-year-old Jacob. He loves books, his dog, and anything related to airplanes or ships. When he grows up, Jacob wants to be a pilot. But until then, Jacob spends his time by helping families who live in poverty. Here’s how!

When Jacob was 10 years old, his elderly neighbors asked if he would shovel their driveway after it snowed. They even offered to pay him in return. Jacob said yes! But instead of keeping the money for himself, Jacob decided to put the money he made from shoveling toward a great cause — to donate barnyard animals like goats, pigs and chickens for families of sponsored children.

Barnyard animals are important because they help feed hungry people by making eggs, milk and meat. They also make baby animals that can be sold for money.

That winter, Jacob raised over $200 by shoveling his neighbors’ driveway!

But that’s not the end of the story — not even close! Fast-forward to the next winter. Jacob decided to raise money for barnyard animals AGAIN.

But this time he ran into a problem — there hadn’t been very much snow to shovel! So Jacob came up with a new, brilliant business idea: baking!

“I like baking. I do it every once in a while with my mom,” Jacob says.

He took orders for baked goods from friends and family. Then he baked and baked and baked! He made two types of muffins and two types of cookies. After he did all the baking and delivered all the orders, Jacob ended up raising over $400! For two years in a row, Jacob was able to give barnyard animals to families in poverty.

Jacob’s generosity also inspired his brother, his cousin AND another family in his neighborhood to raise money for families in poverty! He set an example for younger kids in his community, and maybe he’ll inspire you too!

Jacob says that if we could talk to the families who received the barnyard animals, he would “thank them for giving [him] the opportunity to bless someone else.”

Jacob plans on raising money again next winter — maybe even by shoveling AND baking. Imagine the huge impact he’ll have!

Jacob's advice for kids who want to raise money for children in poverty:

"No donation is too small. Everything counts!"