Art From the Heart

Have you ever woken up with an idea that can help change lives? Five-year-old Evie did! 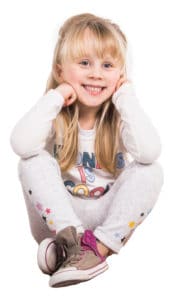 One morning, Evie woke up with a great idea to create art to help kids in need — like the girl her family sponsors! Not only are kids in poverty having to stay home because of the coronavirus, but they also deal with other natural disasters like floods and earthquakes! Evie said, “Sometimes I feel bad for [kids in poverty] and want them to have a better life.” She loves art, so why not make art as a way to inspire others to donate to Compassion?

So Evie made a video talking about her idea of Evie’s Art, and then created an online donation page with a goal of $500. For each person who donated to Compassion through the donation page, Evie sent them a piece of artwork she (or another kid) made. She used watercolors, cut out shapes, and even melted crayons to create the artwork! Sometimes she was asked to color specific things like dinosaurs or pigs.

Evie wanted other kids to be able to be a part of Evie’s Art, so she rounded up friends and family to help create the art. Over 50 pieces of artwork came from kids all across the United States! Kids as young as 2 years old have helped Evie out.

Evie created a special art series. An art series is when you make more than one drawing of the same thing. Evie’s series was of rainbows. Did you know that a rainbow represents that God will always keep his promises? How cool is that?!

In just one weekend, Evie reached her goal of $500! She was excited to reach her goal but was having so much fun that she kept it going. Evie said it’s a lot of hard work but wants other kids to know they can make a difference no matter how big or little they are — right from home!

Now let’s all go make some art like Evie!

Sending Art to Your Sponsored Neighbor

Artwork is fun to send and receive! If your family sponsors a child, here’s how to send artwork to him or her.

3. Write your sponsor ID number and sponsored child’s name on the art

4. Fold the artwork into an envelope and send to Compassion International