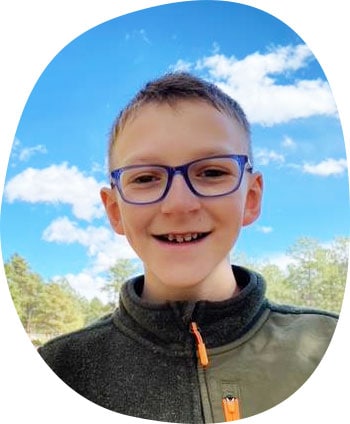 Traynor looked up at the tall red rocks around him as he logged the seventh mile of his hike. He wiggled his toes in his boots and was relieved he could still feel them despite the cold October morning. “How about a few more miles?” he shouted to his family a few paces behind him. It was Traynor’s birthday, after all. If he wanted to go a few more miles, that’s exactly what they would do.

This was not how Traynor’s mom imagined he would be spending his birthday. Although Traynor loved the outdoors, four miles was the most he had ever hiked. On top of that, Traynor struggled with allergies and a compromised immune system that sometimes kept him on the sidelines. But his mom has learned not to underestimate Traynor.

Just a few weeks before they found themselves in a hiking area in Colorado, Traynor told his mom that for his 12th birthday he had set a big goal: hike seven miles and raise $10,000 for children in poverty. Traynor’s big idea snowballed quickly. He created fliers, designed T-shirts and took to social media to raise support. Before long, people he didn’t even know began donating to help children in need.

Traynor remembers, “I was just thinking about how much God gave me and how I can give back!” He shares a birthday month with the child his family sponsors through Compassion and knows what a struggle life can be for her. That’s why Traynor chose to raise money for the Where Most Needed fund at Compassion. He wanted to be sure he could do the most good at just the right time for children in need.

Back in the canyon, Traynor and his family marched right past his seven-mile goal. At each mile marker, they stopped to take a picture. In each photo, Traynor’s smile seems to get bigger and bigger. His family wondered with amazement, “How far will he go?” It seemed that Traynor had a new goal in mind now that he was on the trail — 12 miles for his 12th birthday. One mile for each year of his life — a life he recognizes as a gift from God. “Sometimes people take for granted what they have,” Traynor says. “We need to help people that don’t have as much.”

As Traynor stepped off the trail after completing his 12th mile, he was greeted with cheers of support and a bright blue Compassion lanyard placed like a medal around his neck — a small token of appreciation for a big act of kindness.

If your family wants to help Traynor reach his big goal, ask an adult to go to explorer.compassion.com/traynor.

"We need to help people that don't have as much." — Traynor